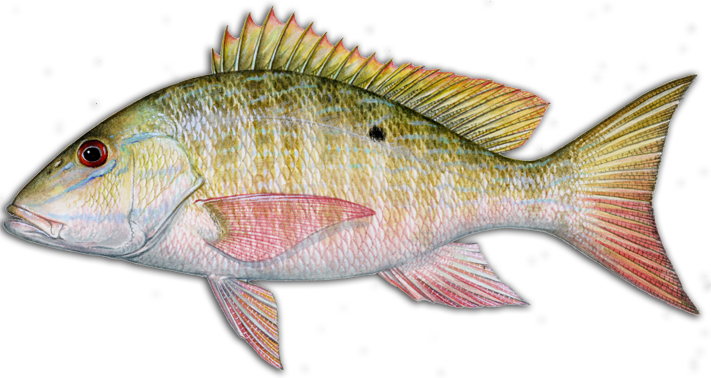 a species of snapper native to the western Atlantic Ocean from North Carolina to southern Brazil, including the Gulf of Mexico and the Caribbean Sea. It can be found in a wide range of habitats, though it prefers coral reefs and sandy areas with plentiful vegetation. It occurs at depths from 10 to 400 m (33 to 1,312 ft), most frequently between 21 and 70 m (69 and 230 ft).

The lane snapper spawns March through September; it is sexually mature at 6 in (15 cm). It feeds on the bottom, taking crustaceans, mollusks, and smaller fish.

a species of snapper native to the western Atlantic Ocean from North Carolina to Bermuda including the Gulf of Mexico and the Caribbean Sea to Brazil. This species inhabits waters from 40 to 300 m (130 to 980 ft) (though rarer deeper than 100 m (330 ft)) where they can be found in large schools over substrates of sand, gravel, or rock. This species can reach a length of 60 cm (24 in), though most are around 35 cm (14 in).

The greatest recorded weight for this species is 3.2 kg (7.1 lb). It is of minor importance to local commercial fisheries. The vermilion snapper is often sold as red snapper.

a species of carangiformmarinefish, the only representative of the genus Rachycentron and the family Rachycentridae. Other common names include black kingfish, black salmon, ling, lemonfish, crabeater, prodigal son and black bonito.

Attaining a maximum length of 2 m (78 in) and maximum weight of 78 kg (172 lb), the cobia has an elongated, fusiform (spindle-shaped) body and a broad, flattened head. The eyes are small and the lower jaw projects slightly past the upper. Fibrous villiform teeth line the jaws, the tongue, and the roof of the mouth. 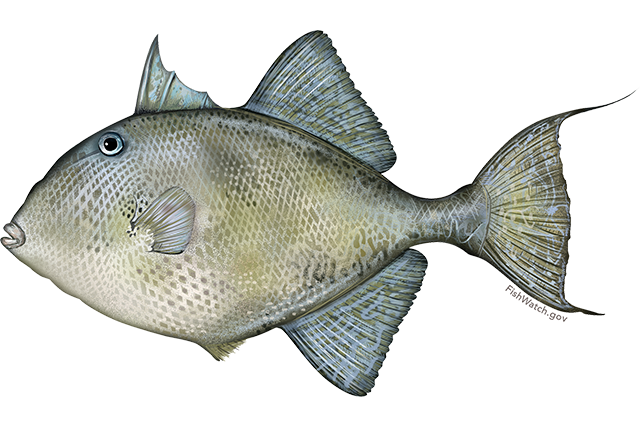 Triggerfishes are about 40 species of often brightly colored fish of the family Balistidae. Often marked by lines and spots, they inhabit tropical and subtropical oceans throughout the world, with the greatest species richness in the Indo-Pacific. Most are found in relatively shallow, coastal habitats, especially at coral reefs, but a few, such as the oceanic triggerfish (Canthidermis maculata), are pelagic. While several species from this family are popular in the marine aquarium trade, they are often notoriously ill-tempered.

Triggerfish have an oval-shaped, highly compressed body. The head is large, terminating in a small but strong- jawed mouth with teeth adapted for crushing shells. The eyes are small, set far back from the mouth, at the top of the head. The anteriordorsal fin is reduced to a set of three spines. The first spine is stout and by far the longest. All three are normally retracted into a groove.

also called kingfish, is a migratory species of mackerel of the western Atlantic Ocean and Gulf of Mexico. It is an important species to both the commercial and recreational fishing industries.

The king mackerel is a medium-sized fish, typically encountered from 5 to 14 kg (30 lb), but is known to exceed 40 kg (90 lb). The entire body is covered with very small, hardly visible, loosely attached scales.

The king mackerel is a subtropical species of the Atlantic Coast of the Americas. Common in the coastal zone from North Carolina to Brazil, it occurs as far south as Rio de Janeiro, and occasionally as far north as the Gulf of Maine and also found in Eastern coast of India

a migratory species of mackerels that swims to the Northern Gulf of Mexico in spring, returns to south Florida in the Eastern Gulf, and to Mexico in the Western Gulf in the fall.

The fish exhibits a green back; its sides are silvery marked with about three rows of round to elliptical yellow spots.

Spanish mackerel are a highly valued fish throughout their range from North Carolina to Texas. Recreational anglers catch Spanish mackerel from boats while trolling or drifting and from boats, piers, jetties, and beaches by casting spoons and jigs and live-bait fishing. Fast lure retrieves are key to catching these quick fish

Adults live around rocky reefs, rocky outcrops and dropoffs in coastal waters, and around pinnacles and offshore islands.Maximum length is often reported to reach up to 180 cm.Culture 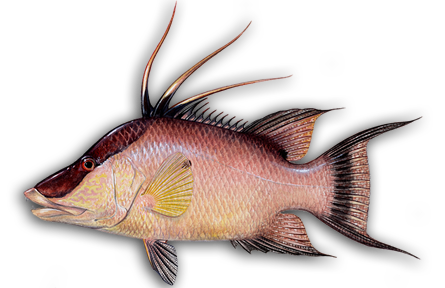 is a species of wrasse native to the Western Atlantic Ocean, living in a range from Nova Scotia, Canada, to northern South America, including the Gulf of Mexico. This species occurs around reefs, especially preferring areas with plentiful gorgonians. This species is currently the only known member of its genus.

The hogfish is characterized by a large, laterally compressed body shape. It possesses a very elongated snout, which it uses to search for crustaceans buried in the sediment. This very long "pig-like" snout and its rooting behavior give the hogfish its name.

Hogfish are commonly targeted by many spear and reef fisherman and are regarded highly by many for their taste and food value. In 2007, the Florida landings of hogfish totaled 306,953 pounds.

or golden tile, is the largest species in the family Malacanthidae (tilefishes), which grows to an average length between 38 to 44 inches (970 to 1,120 mm). The great northern tilefish is a slow-growing and long-lived species, which has four stages of life. After hatching from eggs, the larvae are found in plankton. As they grow into juveniles, the individuals seek shelter until finding or making their own burrows.

The great northern tilefish has been subject to regulation to prevent overfishing. Regulations include catch limits and gear restrictions to prevent damage to the species' habitat and population. The result of these regulations has been a rebounding of the population, which led to an increase in the 2012 catch limit in the southern part of the Atlantic seaboard.

also known as the "Zambezi shark" (informally "zambi") in Africa, and "Lake Nicaragua shark" in Nicaragua, is a requiem shark commonly found worldwide in warm, shallow waters along coasts and in rivers. It is known for its aggressive nature, and presence in warm, shallow brackish and freshwater systems including estuaries and rivers.Bull sharks can thrive in both salt and fresh water and can travel far up rivers.

They have been known to travel up the Mississippi River as far as Alton, Illinois,[3] about 700 miles (1100 km) from the ocean. However, few freshwater human-shark interactions have been recorded. Larger-sized bull sharks are probably responsible for the majority of near-shore shark attacks, including many bites attributed to other species.[4] 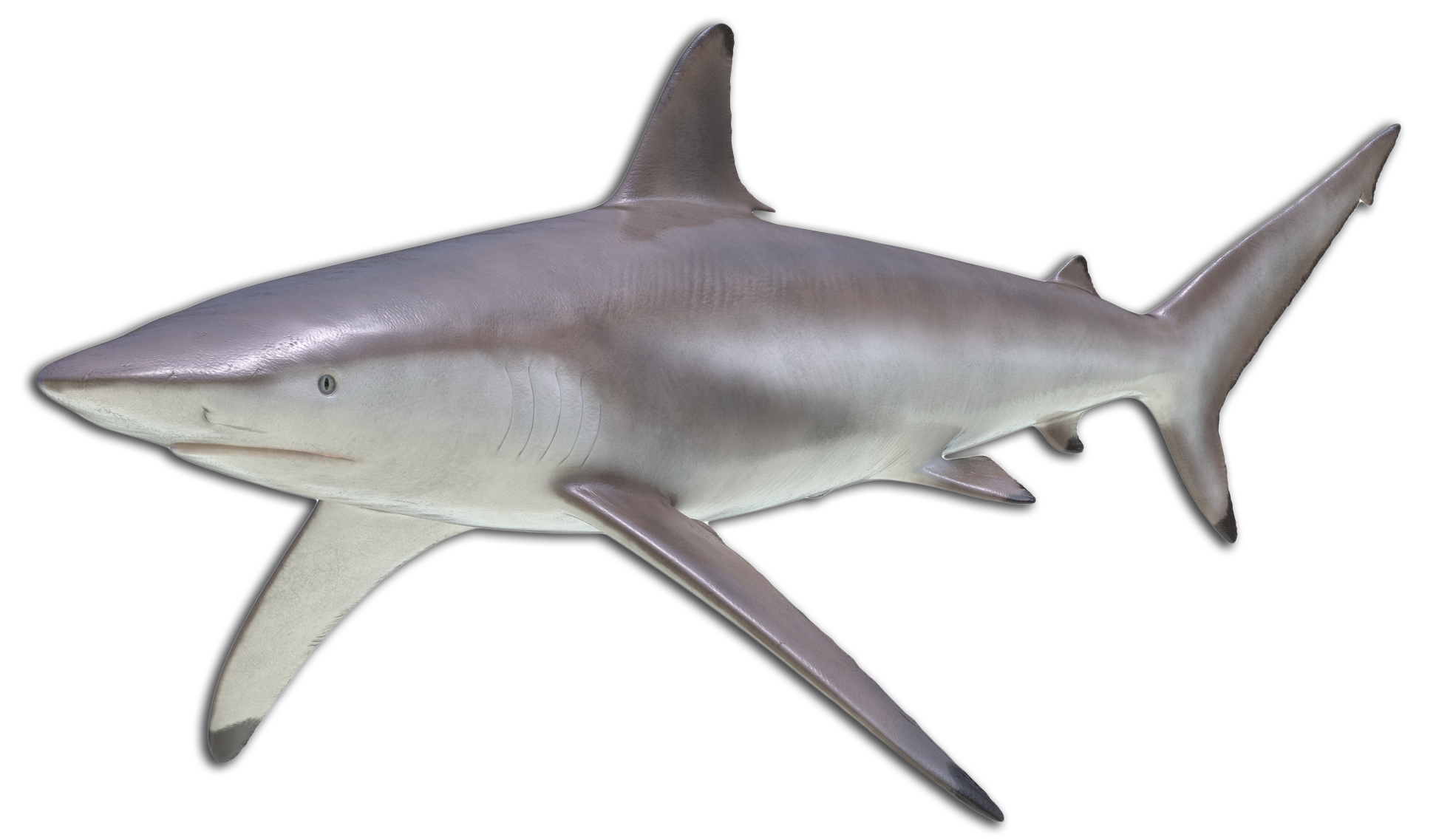 is a species of requiem shark, and part of the family Carcharhinidae. It is common to coastal tropical and subtropical waters around the world, including brackish habitats. Genetic analyses have revealed substantial variation within this species, with populations from the western Atlantic Ocean isolated and distinct from those in the rest of its range.

The blacktip shark has a stout, fusiform body with a pointed snout, long gill slits, and no ridge between the dorsal fins. Most individuals have black tips or edges on the pectoral, dorsal, pelvic, and caudal fins. It usually attains a length of 1.5 m (4.9 ft)

is a species of requiem shark, in the family Carcharhinidae, named for the spinning leaps it makes as a part of its feeding strategy. This species occurs in tropical and warm temperate waters worldwide, except for in the eastern Pacific Ocean. It is found from coastal to offshore habitats to a depth of 100 m (330 ft), though it prefers shallow water. The spinner shark resembles a larger version of the blacktip shark (C. limbatus), with a slender body, long snout, and black-marked fins. 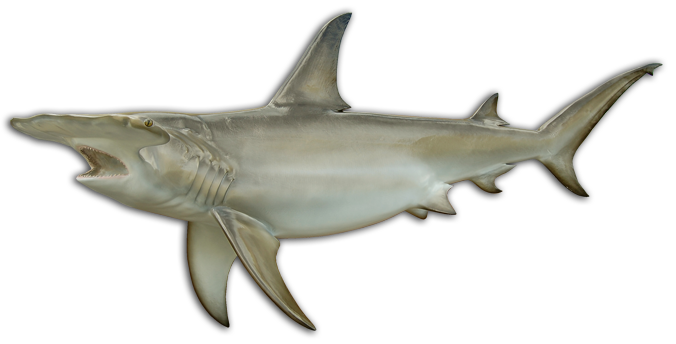 a group of sharks that form the family Sphyrnidae, so named for the unusual and distinctive structure of their heads, which are flattened and laterally extended into a "hammer" shape called a cephalofoil. Most hammerhead species are placed in the genus Sphyrna, while the winghead shark is placed in its own genus, Eusphyra. Many, but not necessarily mutually exclusive, functions have been postulated for the cephalofoil, including sensory reception, manoeuvering, and prey manipulation.

Hammerheads are found worldwide in warmer waters along coastlines and continental shelves. Unlike most sharks, some hammerhead species usually swim in schools during the day, becoming solitary hunters at night. 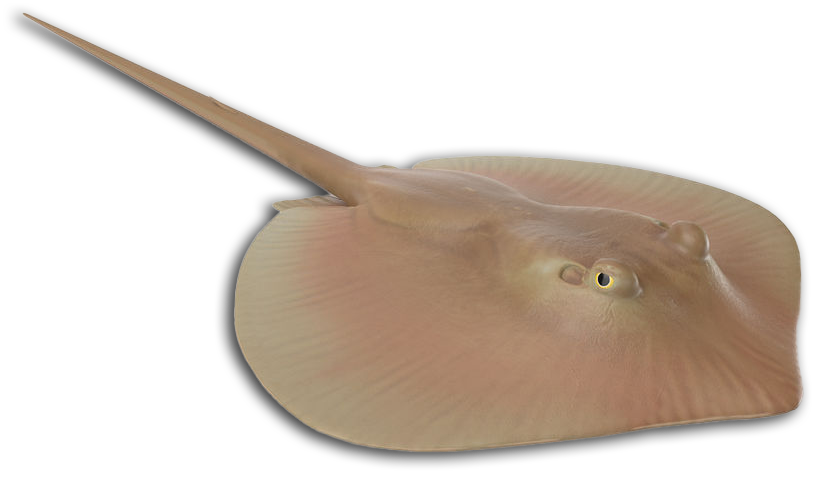 a species of stingray in the familyDasyatidae, common along the Atlantic coast of North America from Chesapeake Bay to Mexico, including brackish and freshwaterhabitats. It may be distinguished from other stingrays in the area by its relatively elongated snout.[2] This species is of little commercial importance,[3] other than for sale in the aquarium industry.

The Atlantic stingray feeds mostly on benthicinvertebrates such as bivalves, tube anemones, amphipods, crustaceans, and nereid worms, which they locate using their electroreceptiveampullae of Lorenzini. The exact composition of their diet varies by geographical location. When feeding, these rays will position themselves facing the current so that the sediment will be washed away.

is a species of stingray in the familyDasyatidae, native to the coastal waters of the western Atlantic Ocean from the U.S. state of Massachusetts to Venezuela. It is a bottom-dwelling species that prefers sandy or muddy habitats 1–10 m (3.3–32.8 ft) deep, and is migratory in the northern portion of its range.

More active at night than during the day when it is usually buried in sediment, the bluntnose stingray is a predator of small benthicinvertebrates and bony fishes.
‍ 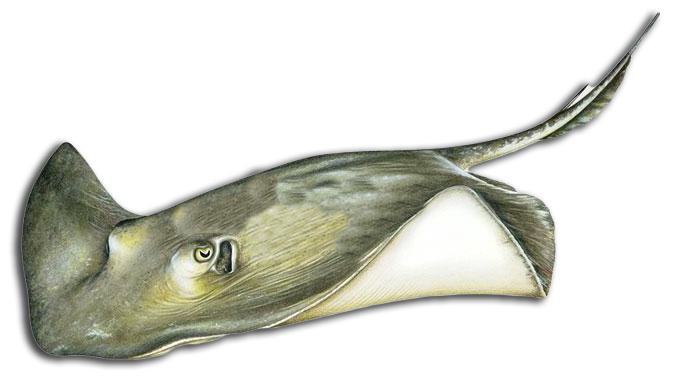 The southern stingray is adapted for life on the sea bed. The flattened, diamond-shaped body has sharp corners, making it more angular than the discs of other rays.[4] The top of the body varies between olive brown and green in adults, dark grey in juveniles, whilst the underside is predominantly white.

‍The wing-like pectoral fins are used to propel the stingray across the ocean bottom, whilst the slender tail possesses a long, serrated and venomous spine at the base, used for defence.[6] These spines are not fatal to humans, but are incredibly painful if stepped on.

Back To Species Info

we put trust in our equipment everyday to ensure enjoyable and successful trips it’s top priority for us to keep and maintain the best available.